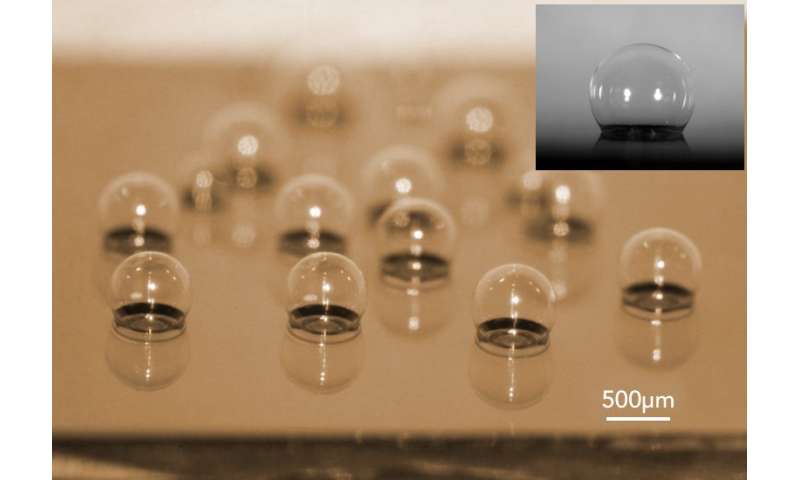 In London's St. Paul's Cathedral, a whisper can be heard far across the circular whispering gallery as the sound curves around the walls. Now, an optical whispering gallery mode resonator developed by Penn State electrical engineers can spin light around the circumference of a tiny sphere millions of times, creating an ultrasensitive microchip-based sensor for multiple applications.

"Whispering gallery mode resonators, which are basically optical resonators, have been intensely studied for at least 20 years," said Srinivas Tadigadapa, professor of electrical engineering. "What people have done is to take an optical fiber and touch the end with a blow torch. When the melted fiber re-condenses, it forms a sphere at the tip. This can be coupled to a light source to make a sensor."
That type of sensor consists of solid spheres and is not compatible with microfabrication methods, but recently Tadigadapa and his team developed an innovative way to grow on-chip glass microspherical shells with incredible sensitivities that potentially can be used for motion, temperature, pressure or biochemical sensing.
The hollow borosilicate glass spheres are blown from sealed and pressurized cylindrical cavities etched into a silicon substrate. Using a glassblowing technique, the thin glass wafer, under high heat and external vacuum pressure, forms an almost perfect bubble. The researchers grew arrays of spheres from 230 microns to 1.2 millimeters in diameter with wall thicknesses between 300 nanometers and 10 micrometers.
"The bottom of the sphere is thinned until it is basically a hole," Tadigadapa said. "You can put the light on the outside of the sphere but do all the chemistry on the inner face of the shell. You can bring in any analyte that you want to identify, but it goes on the inner surface. That brings in a lot of possibilities. You can do chemical sensing, vapor sensing, biophysical sensing, pressure sensing and really outstanding temperature sensing."
After many failed attempts, the team discovered that the key to making a high-quality sensor lays in making sure that the equatorial plane of the sphere, its center, is above the surface of the chip.
To get an understanding of the quality of their spheres, Tadigadapa's doctoral student Chenchen Zhang and recent doctoral graduate Eugene Freeman worked with Alexander Cocking, a doctoral student in the lab of Penn State laser expert Zhiwen Liu, professor of electrical engineering.
"We make the bubbles and then take them to Dr. Liu's lab to get the resonance levels and make the measurements," said Zhang, lead author on a paper describing their work, which appears today (Nov. 2) in Scientific Reports, an online, open access journal. This result will have particular significance for lab-on-a-chip biophysical sensing for disease sensing, Zhang said. "Or by adding a polymer coating on the inside of the bubble, you could make a really sensitive humidity sensor."
Tadigadapa added, "There are some really exciting possibilities. I think it will spawn a large follow-up work."
Source: phys
If you need more information about Substrate Wafer, please visit our website:http://www.qualitymaterial.net  or send us email to angel.ye@powerwaywafer.com or powerwaymaterial@gmail.com.
发帖者 substrate wafer_Powerway Wafer Co.,Limited 时间： 7:04 PM